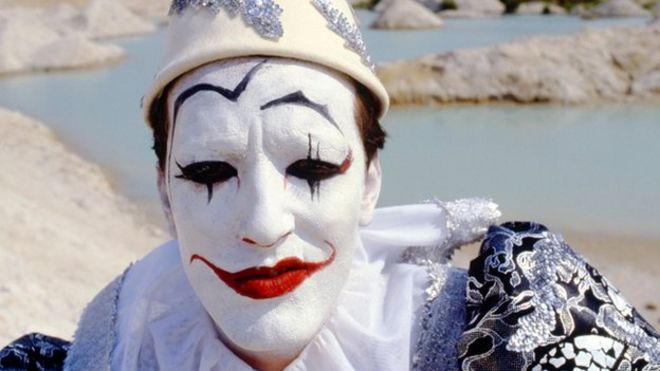 Not just a pretty face: Clowns can cross borders and work with marginalised youngsters

“Running away to join the circus” used to be a romantic way of escaping the family and leaving behind conventional society.

Now circus skills are being used not as a way of running away, but as a way of preventing marginalised young people from dropping out.

And there is a branch of academic study to examine the social impact of circuses, known as “circademics”.

The idea of “social circus” is being used to help youngsters in many different countries. A map from the Cirque du Soleil group shows how such schemes are springing up all over the world.

Practitioners claim that teaching children circus skills helps them to trust other people, improves their “physical literacy”, and raises their self-esteem and sense of identity.

These are skills that are particularly useful for young people in conflict zones and divided societies – and there have been projects in places such as Afghanistan, Bosnia and Northern Ireland.

Send in the clowns

The circus is rarely seen as a threat and this has allowed organisations like Clowns Without Borders to bring circus to families in refugee camps or warzones. This humanitarian project, which aims to relieve suffering through making people laugh, began in the conflict in the 1990s in the break-up of Yugoslavia. It now operates in Africa, Asia, the Middle East and Latin America.

There has also been the Mobile Mini Circus for Children in Afghanistan, running since 2002. The founder, David Mason, said he wanted to give children “the childhood they had been deprived of after so many decades of war”.

Mr Mason said children in warzones can feel powerless and enter “survival mode”, but working together as a team to learn new skills and perform them in front of an audience helps them to develop their own identities.

In an attempt to measure the value of such circus education projects, the Circus Research Network was set up last year, bringing together academics and those running “social circus” schemes, into the discipline now referred to as “circademics”.

The head of the network, Ron Beadle of Northumbria University, says the number of research projects into circus is growing rapidly and there is “compelling evidence” that circus benefits disaffected young people.

Prof Beadle wants circus to become an option in the school curriculum. “These transformative effects can be achieved with only an hour of teaching a week, which takes no more time than a PE lesson,” he says.

He argues that circus is different to music and sport because learners soon reach a level where they can teach others. ‘Teaching other kids gives them an early experience of responsibility which is hugely valuable,’ he says.

One of the UK’s longest-running circus schools is based in Belfast and celebrates its 30th anniversary this month.

The Belfast Community Circus School was set up as a response to the Troubles and its brightly-painted circus van became a regular sight on the Shankill Road and Falls Road in the 1980s and 1990s.

Will Chamberlain, head of the circus school, said they were quickly accepted by both communities because unlike other activities such as music and sport, circus was not “owned” by any particular religious or political group.

“People thought: ‘What could be crazier than starting a circus in Belfast in the middle of the Troubles?’ So they left us to it,” he said.

For many years the group worked with St Vincent’s Centre, a school for 11 to 16 year olds who have been excluded from mainstream education.

Teachers reported improvements in pupils’ behaviour, attendance, and literacy rates with only two hours of circus training every week. Soon afterwards, circus became a formal part of the curriculum at St Vincent’s.

Today the Circus School’s weekly skills workshop in the centre of Belfast is attended by 300 children a week, with 1,200 on a waiting list.

Mr Chamberlain said circus has worked well in Belfast because of the physical risks involved in thrill-seeking activities like walking a tightrope or acrobatics.

It also encourages children to trust other people regardless of their religion. “We do not sit down and talk to kids about how they are all the same or anything like that,” he said.

“But if you are a Protestant lad on top of a human pyramid and the person holding you up is Catholic, you can’t just walk away. You have to trust them.”

Social circus does not only aim to change young people who are taught new skills, but also the adults who come to watch them perform.

NoFit State Circus in Wales has run skills workshops with children from the Shirenewton and Rover Way sites for gypsy, Roma and traveller people in Cardiff.

In the most recent project, the circus spent 12 weeks with children from the Rover Way caravan site. At the end, they performed in front of 500 people at an arts festival.

“When people hear there is a circus performance or a free workshop, they tend to show up,” says Lynn Carroll, community manager at NoFit State Circus.

“The perceptions that so many people have about the Roma community are terrible and they often come from myths perpetuated in the media.

“When adults see these young people working hard and performing new skills, they learn to ignore these myths and it breaks down barriers between the travelling and settled communities.”

Belfast’s Will Chamberlain says circus is a valuable outreach tool because it does not require children to be able to read or write and it does not pit them against each other.

“In most activities some kids are better than everyone else at academic work, music or sport, but circus is all about working as a team and achieving your own potential,” he says.

“Any child can learn a circus skill, whether it is juggling, trapeze, performing magic tricks. Or even being a clown.”